Ending Karmic Contracts
​
​The Journey Back To Love 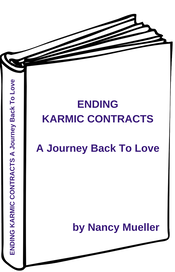 ENDING KARMIC CONTRACTS, The Journey Back To Love
By
Nancy Mueller

​They say that life will never give you more than you can handle, but sometimes, life can seem so overwhelming that you just don't know if you can make it through one more day.

He was just as familiar with the house as I was, but I was hoping he didn’t know about my hiding place in the attic.  I could hear him downstairs, bumping into things, swearing and making a mess while he overturned anything in his way.

I’d discovered the alcove in the attic a few weeks ago when I was looking for a place to hide my stuff while preparing for my big get-a-way. I’d made up my mind that I was getting as far away from this place as I possibly could.  I didn’t know where I was going to go, but any place had to be better than here.

While I was hiding my stuff and moving boxes around, I found the alcove and I remember thinking that it would make a great hiding place; the very place I’m moving towards right now, trying desperately to control my breathing and not to make a sound.  He was definitely looking for me, I could hear him softly calling my name causing the hairs on the back of my neck to stand on end.

I crept up the stairs, found the alcove and pulled the boxes back to hide myself.

He was still whispering my name and I could hear his footsteps coming up the stairs.  As he reached the top of the stairs, I couldn’t see him but I could sense him.  He was standing very still, waiting, watching and then I smelled him, he was too close.  I felt the panic start to rise within me as I forced myself to keep still, barely breathing, not making a sound.  If he found me, it would be all over.  But the smell; that unmistakable odor of cigarettes, lip balm and sweat began to permeate my panic and as I felt my gag reflex go into hyperdrive.

It was all I could do to sit there, barely breathing as I fought the urge to scream and run.

Finally, he went back downstairs. I could still hear him banging around but then I heard the back-door slam and the car start up.

Maybe my luck was turning, maybe I could get out of the house and hide next door.  I had to stop running to them for help, but I felt so safe with them.  They didn’t deserve to be put in danger; I promised myself that this was the last time, I was so tired of being afraid.

I crept down the stairs and looked outside; his car was gone.

I breathed a huge sigh of relief as I let myself out of the house, and that’s when I smelled him.  With a sinking feeling I knew I had let my guard down too soon.  In the next instant, his hand was clamped over my mouth as I heard him snarl, “where do you think you’re going?”

I should have known, he was always one step ahead of me and there would be no escape this time.  I wanted to be afraid, but I was so tired of my life, I didn’t even care.

I remember thinking, “I just don’t care.  Pretty soon whatever he has on his mind will be over and more than likely I’ll be dead.

When I’m dead, I won’t have to wake up every day and live this miserable existence I call a life.  I seriously doubt anyone will even notice I’m gone.”  I wondered for the millionth time what I’d done to deserve such a miserable life, and that’s the last thing I remember.

The next time I opened my eyes, someone was standing over me.  He had an expectant look on his face, like he was waiting for me to do or say something to him.

With every question came a new sense of panic and as my panic escalated, my voice got louder until I could hear the belligerence in my tone.  I knew I was acting hysterically, but I didn’t have a clue about where I was or what was going on.  Suddenly, I felt so tired.  I felt like my entire body was being crushed into the bed I was laying on and all I could do was close my eyes and surrender to the sleep that was pulling me under.

When I came to the second time he was still there, smiling down at me.  Who was this guy and what did he want? He didn’t look like he wanted to hurt me.  He looked more curious than menacing.

When he spoke, his voice was soft, comforting and mesmerizing.  He simply said, “welcome back.”

BACK?  Back where?  Where in the heck am I?  I started to look around while trying to get my bearings, but everything seemed kind of fuzzy.  It was as though I was trying to wake up from a dream, but I couldn’t let go of my dream state and commit to being awake.

That’s when the realization hit me, “I was totally powerless, didn’t have a clue where I was and whoever this guy was, he was standing over me and I had no idea if he was friend or foe.

I asked him his name and he said, “Ben. I’m here to help you if you’ll trust me.”

He answered softly, “what do you feel?”

FEEL? Was he crazy?  I was FEELING afraid, that’s what I was feeling.  As the realization of my predicament started to sink in, the fear was pretty much taking over any and all feelings I was having.

Then he said, “instead of giving into your fears, allow yourself to listen to your intuition.  Is it telling you to fear me?  Close your eyes and slow your breathing down.  Give yourself permission to use all five of your senses to assess your situation.”

He must be freaking kidding me, no, he must be out of his mind.  There was no way in this world I was going to listen to him.  Right now, fear was the only thing I could feel and as my panic started to give way to hysterical breathing, I simply passed out.
When I came to again, Ben was still there, smiling down at me.  I couldn’t tell if I had passed out for minutes, hours or days.  Everything seemed surreal, nothing seemed normal and yet, I realized I wasn’t afraid any more.

I tried to sit up, but I couldn’t move. I asked Ben why I couldn’t move, and he calmly said, “because you’re trying too hard.  Relax, breathe deeply, calm your mind and simply will your body to do what you want it to do.”

Huh?  Had I hit my head and landed inside of a fortune cookie?  But I did as he suggested and to my surprise, I sat up.  Well, that was easy!

As if he’d read my mind, Ben said, “yes, we often make life harder than it needs to be.  When we learn to stop struggling, life becomes effortless.”

I rolled my eyes and thought, “oh, that Ben.  As in Obi Wan Kenobi!”  Obviously, I was in a coma and this was all a dream.
Ben smiled and said, “no, you’re not in a coma and I am not Ben Kenobi, but I can hear your thoughts.”

After what I’d been through, trust was no longer part of my vocabulary, so I decided to test him.

He laughed and answered, “only what you’re willing to give.”

I started to feel the panic return within me and thought, “Ha, I’m not GIVING you anything.  I want to know where I am, who you are, what I’m doing here, how to escape, but mostly, mostly I started wondering if I’d lost my mind.”

He smiled and said, “I told you, my name is Ben and I’m here because you invited me.  What’s the last thing you remember?”

I know I hadn’t asked those questions out loud and this whole situation was starting to really freak me out.  I thought about his question as I answered slowly, “I remember being afraid, trying to leave the house and then I smelled him as he grabbed me from behind.”

“Anything else” he asked?

“I remember thinking my life must be over and no one would even miss me.  Is that what this is all about?  Did I fall and hit my head and now I’m dreaming that I’m in a Charles Dickens novel where the ghosts of Christmas past, present and future are going to visit me and show me why the world needs me?”

His smile seemed to waver a bit when he replied, “when you’re done fighting the question, maybe you can remember the last thing you said before you woke up here with me.”

Ok, I had to admit that I was resisting his question, he had me there.  I thought about it.  I tried putting myself back on the porch, in the dark, filled with fear, then the awful familiar smell as I was grabbed from behind, and then it came to me.  I yelled out, “Oh God, I can’t take any more of this, please help me.”
​
I looked at Ben and he smiled.  Suddenly, I wasn’t afraid anymore.  Suddenly, I wanted to know more.  I still wasn’t quite sure what was going on, but I had a feeling that I was safe, at least for now!